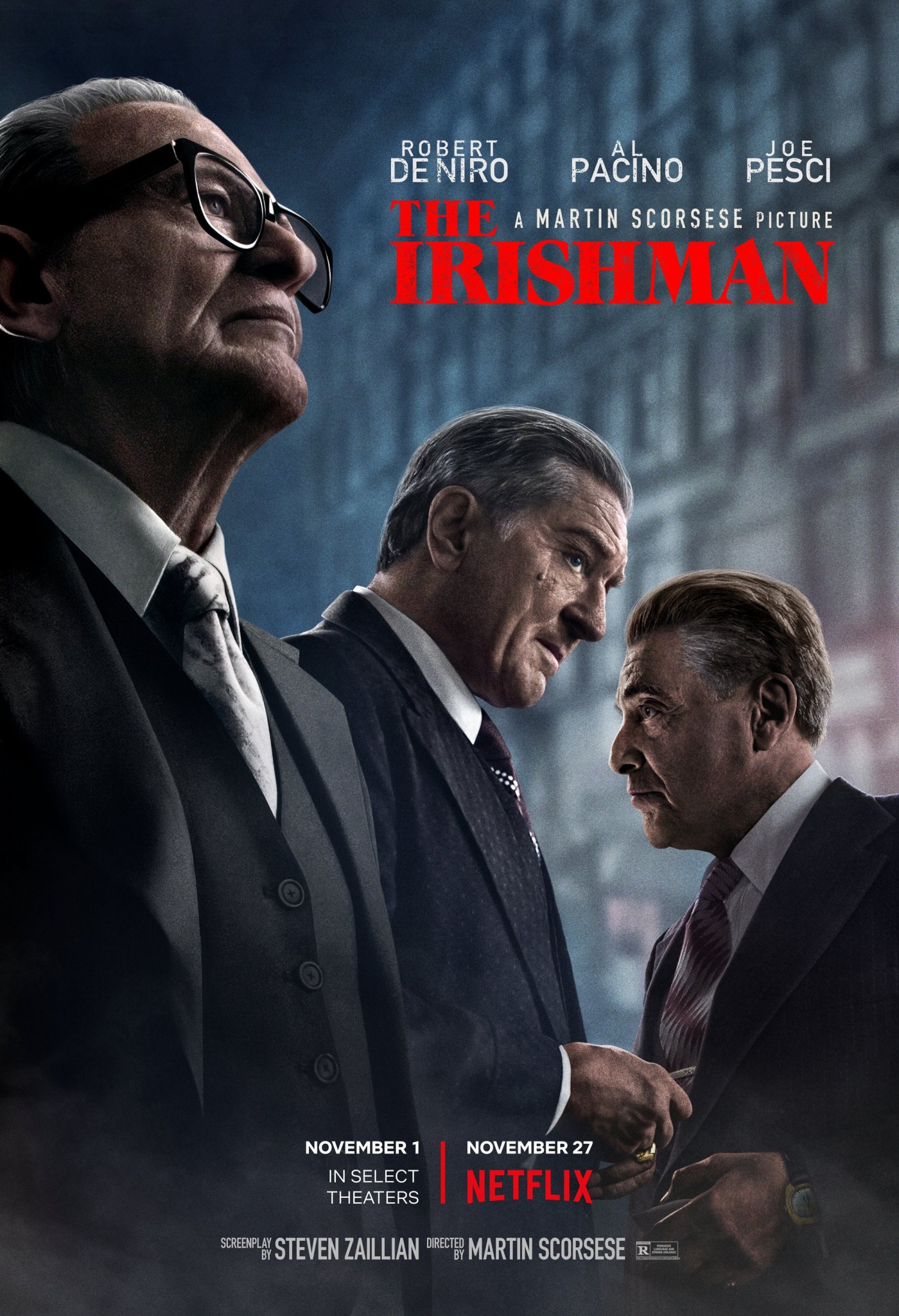 A Martin Scorsese film is like an old, leather wingback lounge chair: Even with its holes and flaws, it is still dependable and comfortable. His recently released The Irishman is 3 hours and 30 minutes long.

That’s a lot of sitting in front of a movie – too much for a seat in the theatre and probably at home, even if it is a comfortable leather wingback lounge chair.

Yet, despite under-editing and overindulging in Netflix-granted liberties, Scorsese produces another fascinating portrayal of early 20th century organized crime and all the hooligans who made it possible.

It is important to note that The Irishman is no “Sunshine of Your Love” accompanied, camera-dancing mobster flick with super cool slow-mo closeups of Robert De Niro grimacing in smoke-filled taverns. It is more a subdued last rites piece about American history, Jimmy Hoffa, teamster corruption, and the slow process of aging in general.

Based loosely on Charles Brandt’s I Heard You Paint Houses, we follow four decades of Frank Sheeran’s (Robert De Niro) development as a truck driver nobody to the hitman for Italian mafioso boss of Northeastern Pennsylvania, Russell Bufalino (Joe Pesci), and finally to the right-hand man of infamous Teamster, Jimmy Hoffa (Al Pacino). Primarily set in the ‘60s, we witness the fascinating rise and fall of Hoffa, his prison term, presidential pardon and release, and all the loansharking and mob interactions in between. The transitions are narrated in flashback fashion by Sheeran in a nursing home, and there are subtle but very effective touches of CGI to “youthen” our aged veteran actors.

By far, the best scenes involve De Niro and pulled-out-of-retirement Pesci. They are not only Goodfellas nostalgic, they reclaim the unlikely but ever so prevalent charm of buddy dialogue in a mafioso culture. (Only John Travolta and Samuel L. Jackson of Pulp Fiction have come close to pulling off this kind of gangster bravado.)

Although Pacino’s Jimmy Hoffa story line is the bulk of the movie, some of his events echo “docudrama” and lose the character study edge we get from De Niro and Pesci. Still, it is always a cinematic achievement to place Pacino and De Niro in the same movie, and they share many more frames together than they did in Heat (1995). (Just don’t watch Righteous Kill, 2008.)

The remarkable 20-minute denouement would have suffered an emotional disconnectedness if Scorsese chopped it into a final series episode, so I can understand the intention of a full-length feature and not a Netflix TV series. However, even for Scorsese’s brilliant eye and notorious passion for the American mob movie, The Irishman is just too long.

No matter how dependable and comfortable the old, leather wingback lounge chair, The Irishman challenges the art of sitting, but De Niro and Pesci are worth the standing applause.

32 thoughts on “The Irishman and the Art of Sitting”