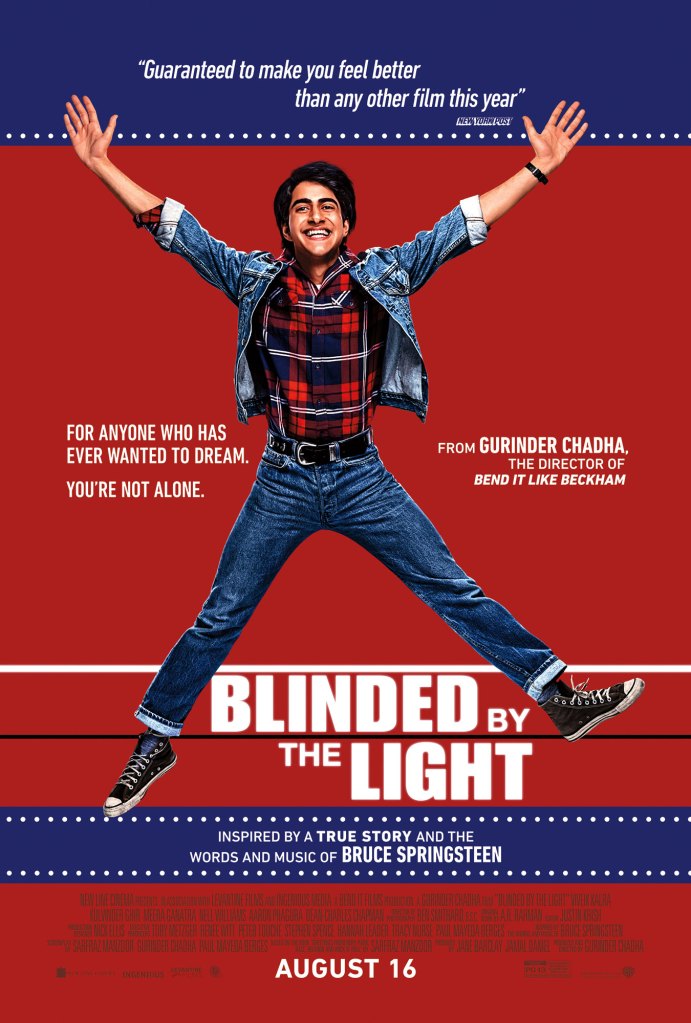 Blend 1987, the Pakistani culture, scratched cassette tapes of Bruce Springsteen, and the nowhere town of Luton, England, and you get the best feel-good movie of the year. Kind of like Beatles-loving Yesterday, Blinded by the Light’s Bruce Springsteen-loving shuns cynicism and reminds us that good stories and good music do occur, and the big screen is the most effective filter.

We follow Javed (Viveik Kalra), a bright Pakistani university prospective who escapes his town’s job-cut depression through writing poems, lyrics, and raw thoughts. His father is a stout traditionalist who believes life’s equation should go job + money = family allegiance. The overcast clouds that hover above Luton also mask Javed’s dreams to fulfill anything “him.” By happenstance, a classmate hands off a couple of Bruce Springsteen cassettes to keep the chin up. Not only does the raspy voice of “The Boss” inspire Javed to keep writing, it erupts a self-sustained music video version of his life, both literal and metaphorical. The results are fun and derivative of an 80s MTV rock video.

I’m always fascinated by the psychological and emotional impressions music can make on a culture, a time, and a place. Apparently, the adolescent to late teen brain has the ability to soak up the most musical information in a lifetime. In addition, the young brain has the ability to thumbprint the experience of listening to these sounds into a clear, long-term memory. In other words, when we were pretty young, our first relationship with a band or a song gave us the butterfly feeling in our stomachs to change the world, “kiss the girl,” or turn up the volume on the highway.

I audibly and visually recall being a middle-schooler and building Lego castles to my uncle’s CD of Pink Floyd’s The Wall. I was subconsciously trying to figure out why Roger Waters sang, “Mother didn’t need to be so…high.” (Such a great song about a mother and son relationship that seemed to make so much sense until that last line.) I’m still frustrated by this song, and the first thing I think of when it’s played on the radio is the carpet and Lego blocks in my cousin’s bedroom.

I heard Collective Soul’s “Shine” for the first time on the beach at Ocean City, Maryland. The song will forever be associated to ocean waves, even though it has absolutely nothing to do with ocean waves.

There’s the time I studied in Florence, Italy during my early college years and blasted ska music (Reel Big Fish’s “Sell Out”) out of my dorm room. The local Italians didn’t know what to make of such sounds and looked at me with slanted eyebrows. (They probably knew ska was only going to last a few years.)

And, then there was my first listening of A.C. Newman’s epic, “I’m Not Talking,” while driving south on Parker Road in Parker, Colorado. The damn song brought me to tears, made me feel worthy and affirmed, and to this day, Parker Road is my encouraging “A.C. Newman.” (My mom is Canadian.)

Experiences like these are brilliantly replicated through Javed’s obsession with Springsteen’s prose. It’s Springsteen’s America and struggle on the tape, and it’s Javed’s Luton and struggle at home. In other words, Bruce is “I’ve got your back” to Javed, even though they are 4,000 miles apart.

Kalra’s performance as Javed is as innocent as it is inspiring. He’s like a new best friend to moviegoers, and we will see him again. Director Gurinder Chadha must not just love music but live it through his camerawork. A case can be made that his entire movie is a musical or a music video, and this is a very good thing in this current, unoriginal cinematic world.

The best compliment I can give this movie is that it not only converted me into a Springsteen fan, it reaffirmed for me the power of music and its capacity to encourage and fulfill dreams during a time and in a place, no matter how bleak or how hopeful. Music is universal, true, and yours if you want it. Javed got it through his Walkman headphones. Today, we can get it through our earbuds. Just hit play and let it go.