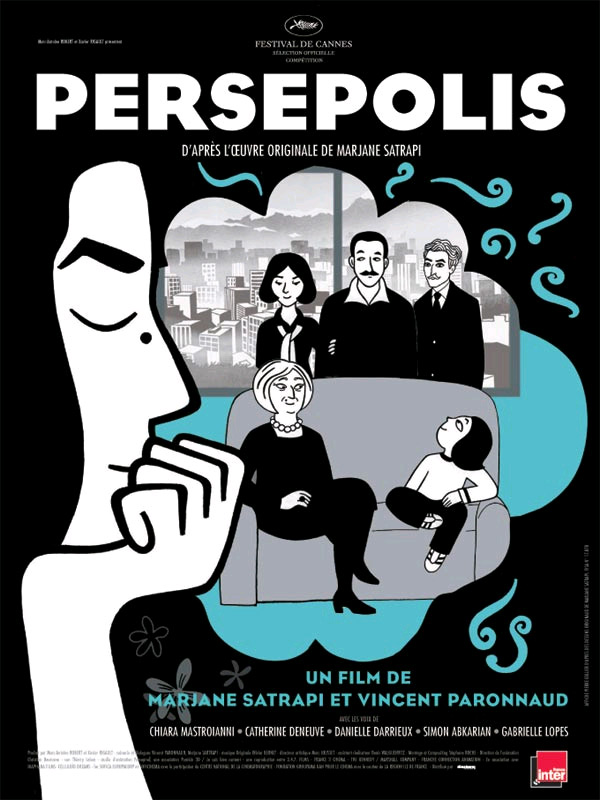 Rather than constantly panning mainstream banalities, good film critics need to find hidden treasures unheard of by most of the public. So, when I unearth a black-and-white animated movie about a young woman coming of age in Iran during the Islamic revolution, I hope you keep reading!

I, myself, had never neither heard of nor read Marjane Satrapi’s 2003 autobiographical graphic novel series, but its motion picture adaptation is probably one of the most complex animated films I have ever seen.

Without CGI, Disney live-action, or even a successful distribution company, Persepolis made a slight appearance in 2008 and has gained a worthy appreciation among indie moviegoers and millennials.

The small film follows the childhood and young adulthood of Marjane (voiced by Gabrielle Lopes), an only child raised by a caring family during the decline of the Shah’s Iran in 1979. During the overthrow of the dictatorship, Marjane is sent to Austria for her safety. Now, she is a foreigner, alone with her passion for punk music and vulnerable to her temptations of false love.

As time passes, she heads back home only to find a country with less individualism than she possesses. Forced to wear a veil and dominated by the tyranny of the mullahs, Marjane simply can’t take it anymore. She finally ends up moving to France, where the “real” Marjane ends up writing and drawing the entire story (this is why the film is in French with English subtitles).

If you have read this far, you know we are talking about a subtitled, 2-D animated flick about a culture that is literally and metaphorically on the other side of the planet. To me, these reasons are exactly why you should see Persepolis. Marjane’s surrounding social climate provides challenges we can learn from, maybe relate to, and certainly sympathize. If not for these reasons, how about watching the film for its Holden Caulfield-like portrayal of a teenage girl in rebellion and self-discovery.

It’s extraordinary how the minimalism of a black-and-white animated features can produce the maximum of emotional impact. This is a small film worthy of another look today.