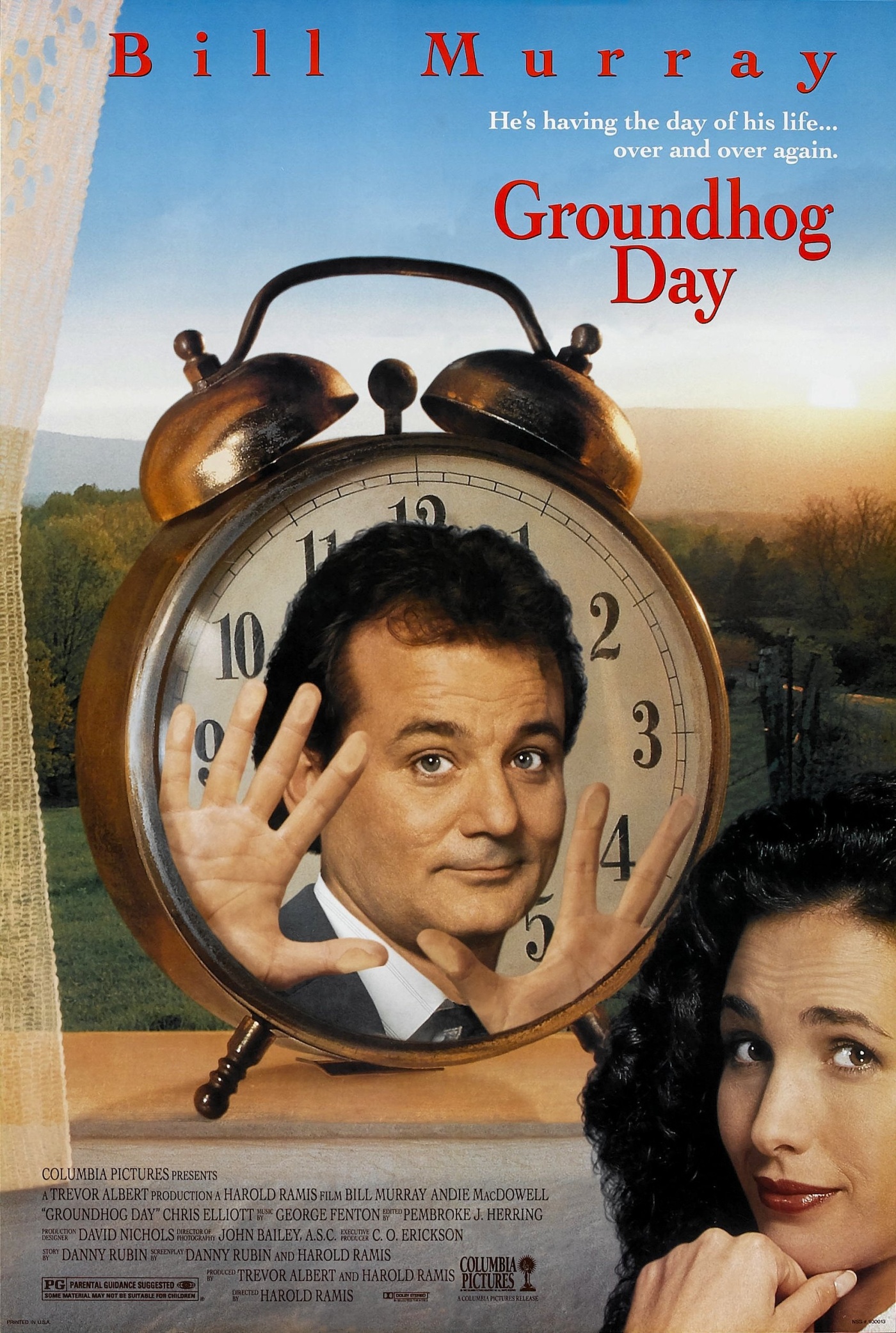 Despite its premise about a day that repeats itself thousands of times from Sonny and Cher’s “I Got You Babe” at 6:00am to the next flip clock rotation 24 hours later, Groundhog Day remains innovative and fresh time after time.

My middle brother and sister-in-law see Groundhog Day every Groundhog Day and tell me: “They don’t make comedies like this anymore. Bill Murray’s facial expressions alone are funny. I think it’s the most spiritual movie I’ve ever seen.”

My loved ones couldn’t be anymore random and anymore right.

It is still a cinematic miracle how weatherman Bill Murray’s self-seeking journey can be so funny on the surface yet so existential on a deeper level, even to this day, 28 years later.

I mean, what would you do if you could relive the same day everyday of your life?

It turns out, it’s more a question of human powerlessness than willpower.

I find it hard to believe most human beings (at least, Americans) wouldn’t follow the same steps as Bill Murray’s “Phil” when he discovers he can come back to life on the same day…

These are valid parallels and delineations, but good ole Bill Murray never really gets angry (except for the scene when he grabs Phil Nyerson’s brown furry winter coat collar), and this movie is less about grief and more about human transformation.

To me, Phil is a post-modern Ebenezer Scrooge (Scrooged, anyone?), a selfish grump who has nowhere else to go but up. If there are stages he follows to get to the top of human transformation, they would be:

This is the fun, haphazard part of the movie where Phil goes to town on vanilla sponge cake, cigarettes, and even death itself. It’s as if he gathers as many pleasures as possible to fill his inner void. How quickly do these materialistic go-tos disappoint and leave Phil in an utter state of…

This is the darker side of the movie. There is no end to this repetitive holiday nightmare, even when Phil makes full use of his suicide attempt options. Director Harold Ramis (RIP) plays his cards wisely and blends this dire reality with a touch of frivolous comedy (the pickup truck ride of doom with the groundhog behind the wheel made it into a Super Bowl commercial last year!). But, the result is always the same: 6:00am to Sonny and Cher. Things can only change once Phil embraces…

Phil’s relationship with Andi MacDowell’s character gradually evolves into an unconditional love, and instead of searching for answers for himself, he turns toward others’ needs. Yet, at the other end of this hope is the acceptance that death is still inevitable on this particular Groundhog Day on repeat, and no matter how many times Phil tries to save the hungry, homeless man, he is a reminded that life is too short.

Finally, after what film analysts have estimated to be 3,176 Groundhog Days, Phil puts 110% into the present moment, taking piano lessons to saving groundhog proprietor, Buster, from choking on his steak, to selflessly (!) winning the heart of his loved one.

What could have been a banal rom-com turns into a spiritual transformation of sorts and one of the ultimate feel-good movies ever made. That isn’t easy to do, and that’s why I’ve always considered this to be a groundbreaking movie. Plus, can you name one person who only saw this film one time? It’s impossible!

For me, Groundhog Day made Groundhog Day a meaningful holiday. I think of everyone who will be watching this movie on February 2nd, and I immediately conclude that they must be good people – people trying their best to do their best.

All the groundhog has to do is come out of his hut and look at his shadow.

Thank you for reading and Happy Groundhog Day!