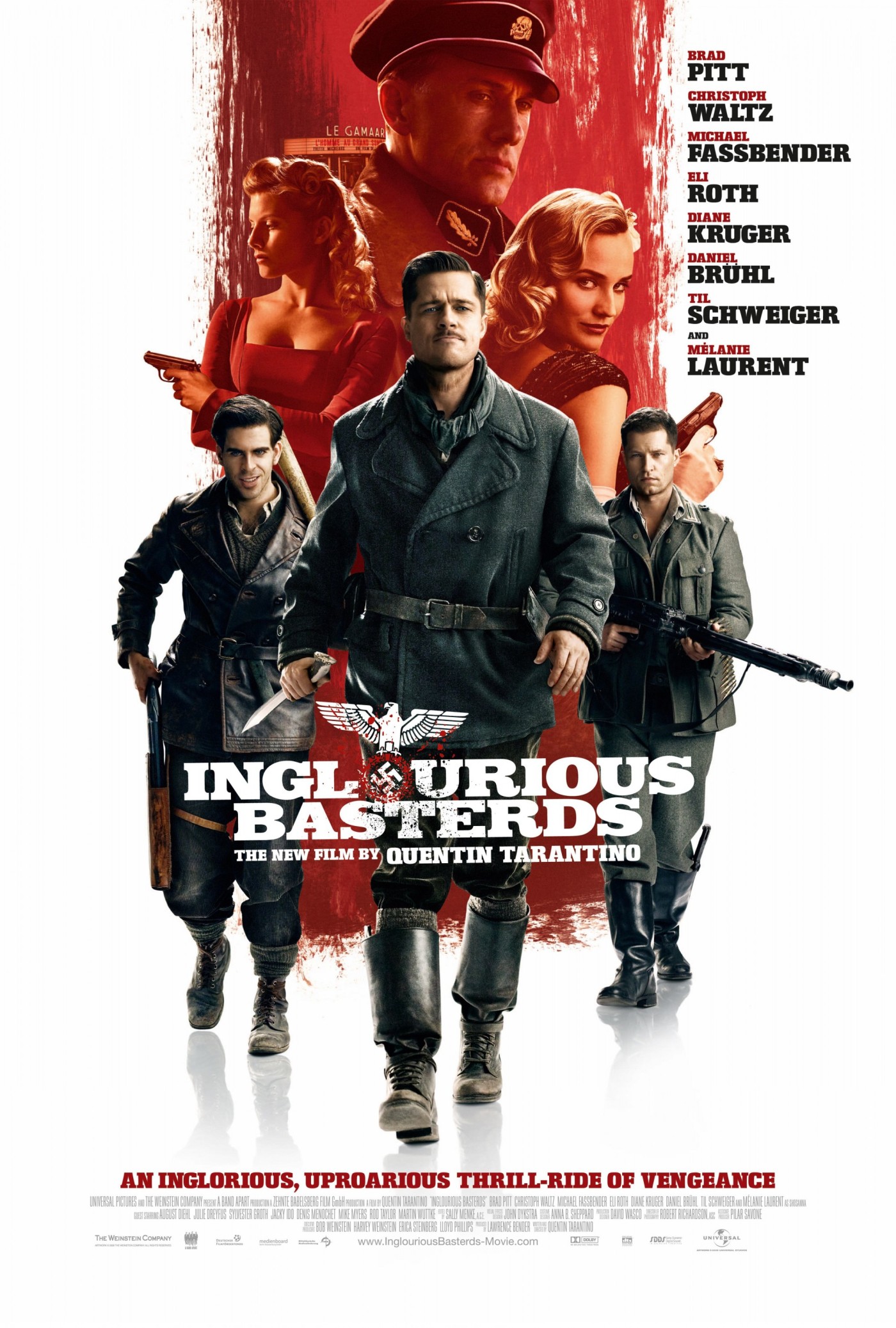 With a misspelled title, extremely revisionist writing on World War II, and a wallop of violence and twisted humor, Inglourious Basterds (2009) may be the most divisive of the Quentin Tarantino canon. The title pays homage to an overlooked 1978 Italian exploitation war flick (with the correct spelling of Inglorious and Bastards) and refers to a Tarantino-conceived group of soldiers from Tennessee who have one job and one job only: “Killin’ Nah-zees.”

As I’ve mentioned many movie reviews ago, I’m a sucker for historical fiction in movies. This type of artistic composition toys with timelines and actual events but holds true the atmosphere of the period, character impressions, and the filmmaker’s freedom to interpret all of the above. As the late, great Roger Ebert would say, “I look to books for facts and movies for feelings.”

In other words, if you are looking for the documented tactical intelligence in Patton or the shear brutality of warfare in Saving Private Ryan, then Inglourious Basterds will be a bludgeon blow of poppycock.

Indeed, these so-called “Basterds” never existed, and we all know that Hitler had more troubles up his sleeve than Lieutenant Aldo Raine (Brad Pitt) and his history-changing posse.

Yet, how can we deny the audacity of the most popular postmodern film writer/director to rewrite history for fun? If Tarantino says Adolf Hitler died in a movie theatre with all of his evil colleagues because of a botched propaganda scheme under the guidance of Brad Pitt and his warriors, then that is what happened. No, I didn’t really give the ending away, and if I did, it doesn’t make a difference because it never happened!

IG is divided into two separate stories with five titled chapters, and, remarkably, all episodes meet at once in a “glourious” finale. The odd-numbered chapters work under the unforeseen brilliance of Christoph Waltz, who plays a smugly articulate and equally vile Nazi in pursuit of Pitt’s resistance. The second most seamlessly executed scene of hold-your-breath intensity occurs under Waltz’s watch in the very beginning of the movie. Fresh milk, a gigantic pipe, two different languages, and machine gun fire: That’s all I’m going to say.

The foremost seamlessly executed scene of nail-biting intensity occurs during the middle of the movie in a dark German tavern in which the Basterd’s guise falls apart minute by minute. The gut wrenching act finally gets exposed by the way a British spy (Michael Fassbender) orders “three” more drinks without including his thumb. More heart pounding ensues in a dialogue only Tarantino could conceive.

Cynics of the movie have ammunition: The World War II history component is completely garbled, human scalp cuttings are caught in nasty close-ups, and the result is 152 minutes too long. Tarantino know-it-alls have ammunition too: Inglourious Basterds is novel escape, sinuous storytelling, and some of the most entertaining historical fiction ever created for the screen.